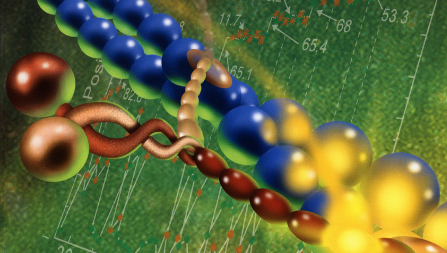 Cells use molecular motors to transfer its contents to desired destinations. Kinesin and Dynein motors walk on microtubules and are powered by ATP hydrolysis. Myosin walks on the actin filament. We study the mechanism of cargo transport in cells using single molecule microscopy techniques. Along with studying the behaviour of single motors, we are also interested in understanding how multiple motors work together.

Muscle contraction is powered by groups of myosin II molecules in a “thick filament”, which pulls on a “thin filament” consisting of actin and associated proteins involved in the regulation (troponin, tropomyosin, etc.). It is the relative movement of myosin over actin which is the muscle contracting. The myosin spends less than 5% of its time (the ATP duty cycle) actually attached to actin, although it is during this time that the myosin undergoes its powerstroke where it moves the actin approximately 10 nm. Myosin spends so little of its time attached to actin, but, at the same time, because there are always myosin’s ready to do the powerstroke, the overall speed of muscle contraction is fast.

However, myosin has many family members that have a high duty ratio and are capable of walking on actin filaments by themselves. Myosin V and VI are two such members, where we have shown, via FIONA, that they “walk” (yes, they have two legs!) while carrying cargoes. Myosin V moves cargoes 37 nm, with one foot taking a 74 nm step over the other (shown by my student, Ahmet Yildiz, now at UC-Berkeley,  in Science, 2003). Myosin VI , despite have shorter legs, generally also takes about 74 nm steps, with one leg becoming uncoiled (shown by Ahmet in J. Biol. Chem. 2004).

Kinesins and Dyneins move on roadways called microtubules, with the kinesins generally walking towards the “plus” direction, and dynein moving towards the “minus” direction of microtubules. Here we have shown that kinesin moves cargoes with 8.4 nm by taking a step of 16.8 nm (shown by Ahmet in Science, 2004 and by my student, Comert Kural, now of Ohio State University, Science, 2005). Dynein sometimes “walks” and sometimes “inchworms” like a caterpillar, or is uncoordinated (shown by Ahmet, Science, 2012.)

How do multiple motors move?:

But in fact, molecular motors tend to move cargoes as “team players”. For example, melanosomes (dark pigments) in your skin move by a combination of kinesin, dynein and myosin V (shown by Comert. Kural, in PNAS, 2007). We are further investigating how teams of molecular motors move cargoes and find that smooth motion can result from having multiple motors simultaneously moving a cargo (see Marco Tjioe, eLife, below), and that forces add, but that the net force pulled by each kinesin is still very small (Saurabh Shukla, in process).

Microtubules are decorated with myriads of roadblocks such as tau protein in a dense cellular environment. How multiple motors coordinate to avoid roadblocks to efficiently transport the cargo to its desired destination, is one of the questions we are currently focussed on.