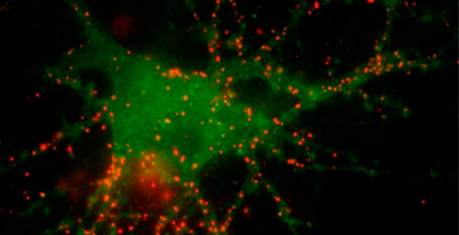 The human brain is made up of 80-100 billion number of cells called neurons, each of which makes connections to 1000-10,000 other cells making a total of >100 trillion connections in the brain. These junctions are called synapses and are the means by which signals are transmitted throughout the brain. In these synapses, receptors are optimally positioned to receive a signal by scaffolding molecules, which dock the receptors. Among two of the most important receptors are called the AMPA- and NMDA- receptors. The Selvin lab is interested in this molecular organization of the synapse and the mechanisms behind how these synapses “learn” and “forget”. At least for “short-term” memory, you learn facts by having a larger number of AMPARs inserted into the synapse upon stimulation; similarly, you forget these facts by the AMPARs getting endocytosed, i.e. leaving the active area of the synapse. There is much interest in understanding this process, as well as understanding how it goes wrong, especially in Alzheimer’s Disease. We use the state-of-the art “super-resolution” methods to see down to a few nanometers of resolution, (smaller than the size of a synapse), while using the relatively non-invasive method of visible lasers (l ~ 500 nm).